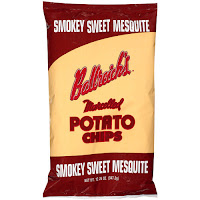 One of the most rewarding aspects of writing this blog is all the opportunities to expand my knowledge and vocabulary.  When I was sitting down to write this review and trying to decide in which order to write the title for the review (as the presentation on the package, ‘Sweet Mesquite Smokey Ballreich’s Marcelled Potato Chips’, didn’t quite flow to my satisfaction), I suddenly realized I had no idea what ‘Marcelled’ meant.  Well, I had a suspicion, so off I went to Google.
Of course, Marcell refers to a “hairstyle characterized by deep regular waves made by a heated curling iron.” That would describe a large portion of the do’s on the swarms of ladies walking outside my apartment, coming to avail themselves to Paris’s premier African hair salon district.  But it also refers to Ruffled chips with wider and deeper trenches in between each ruffle than usual.  Think, wide as a ridge-cut French fries!

Needless to say, Ballreich’s chips are precisely of this variety, and all the more charming for it.  Each of the blonde potato chips is large and fairly thick, but in a soft-crunch rather than hard-cracking way.  The long, lazy waves on the chip’s surface happily channel the tongue to lap up the flavored goods, which are admittedly intriguing.
Ballreich’s Mesquite chips reminded me of the sweet molasses flavoring of Grippo’s Barbecue chips, which is high praise considering my stunned enjoyment of that product.  However, Ballreich’s chips emphasize a different, saltier aroma, albeit with equal verve and intensity- the chips appeared to be cooked in, or seasoned, with shortening, aka, lard, and the pervasive salty-fat taste makes the chips taste as if they were fried on a salt pan full of rib-meat and bacon drippings.  (The ingredients list clarifies that the chips are cooked in ‘soybean shortening’, but like many other products derived from the protein substitute, it definitely proves convincing!) That the shortening is soaked inside the chips, rather than applied on top, makes it all the more pervasive, ﻿﻿
The downside of the flavoring is that it does bring the chips heavily on the salty side, and some may feel the evocation of lard on the grill is a little disturbing.  (For what it’s worth, the chips have an average number of calories, but an above average number coming from fat.)    The seasoning does, nonetheless, deliver the entirety of the barbecue experience, with mesquite spices (but not hot spices), a general smoky aroma, and those sweet molasses notes (the ingredients list includes molasses, onion, garlic, and paprika powder.)
Overall, I appreciated the unique stylings of these crisps, from their lovely marcelled soft-crunch potato slices, the soaked-to-the-bones shortening flavor, and the lovely notes of sweet molasses.  However, the other aspects of the barbecue flavoring are little further in the background than I would have liked- more spice and more sugar would have been a plus- and the saltiness and the fatty-tasting sensation has downsides as a chip flavoring.  As long as you can suppress the instinctive guilt at eating something which really tastes like it’s been soaked in salty, delicious fat, you may still find Ballreich’s fashionably-cut crisps worth giving a try.


Pros:
- Remarkable lard-shortening flavor pervades the foundations of each crisp
- Large marcelled chips with a crumbly soft crunch are pleasure to munch
- Sweet molasses notes in the seasoning distinguish these from regular barbecue chips


Cons:
- At times a little too salty, and the sweeter aspects of the barbecue seasoning get a short shrift
- The shortening flavor may possibly be a turn off for some
Posted by Sebastien at 10:02 AM