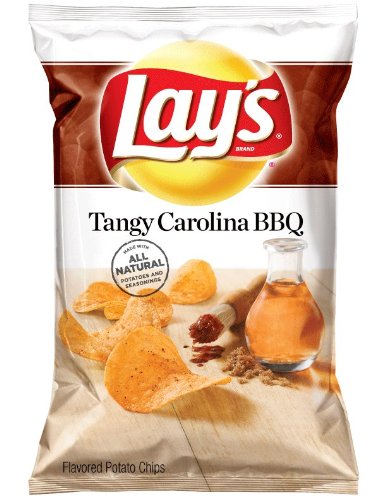 Having first tasted Utz’s South Carolina BBQ chips and greatly enjoyed them, I had fairly positive expectations going when I bought Lay’s own ‘Tangy Carolina BBQ’ offering.  It was a pleasant surprise to discover that Lay’s had not merely emulated Utz’s formula in a technically superior package (or potato chip, to be precise) but taken the flavor in a slightly different, thoroughly pleasing direction.

Lay’s chips succeed admirably at emulating the flavor of South Carolina barbecue sauce, which is basically a thinner, more vinegary variety compared to the thicker, sweeter Midwestern barbecue sauces typified by KC Masterpiece that you usually find in stores and restaurants.  Even though I still more in the Midwestern camp, the South Carolina style offers some very welcome variety to the field.
What this means in practice is, just like the Utz’s rendition of the Caroline barbecue, you have a sort of combination of barbecue sauce and vinegar flavors.  However, Lay’s chips also incorporate the peppery flavor of the spice rub that would go straight on the meat of an actual barbecue, and is more rewardingly complex for it.  There is also a pleasing mild spiciness which builds to a gentle warmth on the tongue during prolonged munching, without actually moving onto the ‘flaming hot’ territory.
﻿
﻿

Altogether, the chips do a terrific job of evoking the flavor of actual barbecued meat, rather than just barbecue sauce.  Who says there hasn’t been progress in the chip world?  This is only one of several chips products I have had in the last year that went from ‘merely’ attempting to simulate the flavor of the sauce to trying to evoke the flavor of the meat and the spices rubbed on it!  (I will eventually put up a review for the Doritos Tailgate Barbecue, which takes this premise to an entirely new level.)
Furthermore, the chips are superbly sized and almost perfect in texture- satisfyingly crunchy, without being too hard or too soft, and complex in shape.  These were clearly manufactured to a higher standard than run of the mill Lay's chips.  This also happens to leave0 them a definite cut above the tasty but otherwise ordinary Utz South Carolina chips, and highly recommended overall.
Stars: 3½
Spiciness Level: Moderate
Pros:
- Tangy South Carolina barbecue sauce flavor is delightful as always for anyone who enjoys a vinegary-sweet sauce
- Nice and innovative attempt to evoke the flavor of spices rubbed onto barbecue meet
- Excellent texture, with thick and crunchy crisps
-Nice moderate spicy flavor that delights without being likely to offend
Cons:
- May not be wholly satisfactory for those looking for a more traditional Midwestern sweet-and-thick barbecue sauce
Posted by Sebastien at 12:40 PM